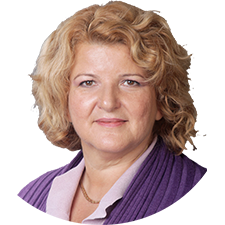 Natalija Mićunović PhD, has a rich history of expert scientific research lasting for more than three decades. For seven years she worked as a Director of Gender Equality Directorate in the Ministry of Labor of the Republic of Serbia, and since 2001 was an initiator and coordinator of many projects aimed at strengthening the role of women and woman entrepreneurship.

She obtained her PhD in Philosophy on the Purdue University in the United States in 1987, having earlier obtained a degree in Mathematics (1983) and Philosophy and World literature (1984) in the University of Sarajevo.

Natalija is a director of Hedone publishing company that is focused on publishing of different works of significant influence in the fields of philosophy, psychology, contemporary sociology in the EU and other developed countries, but also fiction of popular authors which are not widely known in Serbia.

She has been a Research Associate to the Institute of Philosophy and Social Theory and Guest Lecturer of the Faculty of Political Sciences in Belgrade.

Always active, she is a founder and a member of many different funds, non-governmental organizations and international associations in the field of philosophy, development of democracy and gender equality. She translated and edited several books. She also has experience as a journalist, reporter and translator for what was once known as TV Belgrade.

She was an initiator, organizer, coordinator and active participant of several dozen scientific, expert and sociological conferences in the United States, EU, Serbia and the surrounding countries.

She is an author of several dozen original scientific works and researches for influential international institutions, universities, scientific institutes and magazines in the United States, European Union and Serbia.