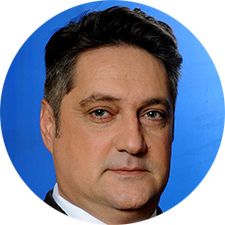 Dušan Korunoski has a career which has started in 1986. During his career, he has worked as a journalist, publisher, entrepreneur, manager, consultant, start-up manager, coach and advisor in many industries. He has experience in journalism, publishing, production management and consulting, as well as in the automotive, construction materials, franchising, logistics and distribution industries. He was the director of several companies in various industries, the director of a factory, the director of sales and marketing, as well as the secretary-general and director of the Serbian Association of Employers (SAE), but also an advisor to the Minister of Economy.

In the last decade, he was condensing his knowledge and experience in representing the business community and in efforts for the achievement of better business conditions through the creation of legal and administrative measures. He conducted these activities through the Serbian Association of Employers (SAE), the Ministry of the Economy of Serbia, the United Nations (UNECE and ILO) and the Business Support Network.

He was “guilty” for the creation and implementation of the idea of Serbia’s progress in the World Bank’s Doing business ranking, for the Government of Serbia’s Bylaw for support the audiovisual industries (attracting foreign investment in the film industry in Serbia), as well for the latest SME Development Strategy  Of Serbia.

He is formally educated as a BA in architecture, with a specialization in urban and city planning and urban development.